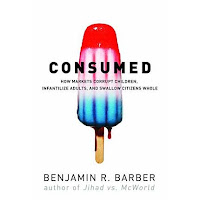 Barber seems to suffer from the "wow-look-at-how-many-big-words-I-can-throw-into-one-sentence-to-sound-impressive" syndrome, but in spite of the windbaggy-ness I dig his polemical and passionate stance.

Turn the front page, however, and you find a little less-bombastic review down the lefthand side of the page. A book of short stories by a woman named Ahdaf Soueif called, very simply: "I Think of You." The stories themselves sound a little too middle-aged-woman-bitter to make me want to pick up the book, but that title's been resonating in my mind like the echoes of a gong in the days since. Don't you think those four little words, so simple and obvious and seemingly quaint, are just about the most romantic words a person could ever hear? I love their simplicity and genuine frankness, their lack of pretension and refusal of excess. Not too much, not gushy, not overwrought; just lovely in their own perfectly rounded solid little way.

Just a thought on this Wednesday morning. A burgeoning Giants fan's gotta think about something else after yesterday's ugly 7-0 loss to the Padres. Ouch! It can only get better from here.
Labels: books consumerism stream of consciousness

Anonymous said…
heard barber on npr yesterday talking about the evils of bottled water and implications for global water inequity, from that alone i think hes great. maybe ill check his book.
April 6, 2007 at 5:01:00 AM PDT