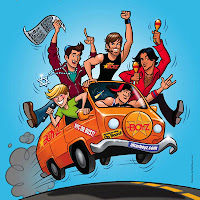 Opened my morning Chronicle today to find a big article on Altar Boyz accompanied by two stellar photos featuring our good buddy TC himself. I would love to steal the photos and post them, but instead of doing so and getting sued, just go here to see the evidence.

Shaun, so proud of you!

The show is running here (starting yesterday) as part of the national tour, and I think it's here through early April. Won't be the same sans our boy TC (who's still with the NYC cast), but I think I'll have to hit it again anyway with a few of my fellow PK's in tow. Hilarious. Definitely check it out if you are around.

Bobbie said…
It's a great show and Shaun is wonderful! You've reminded me that I want to go back and see Altar Boyz again myself.